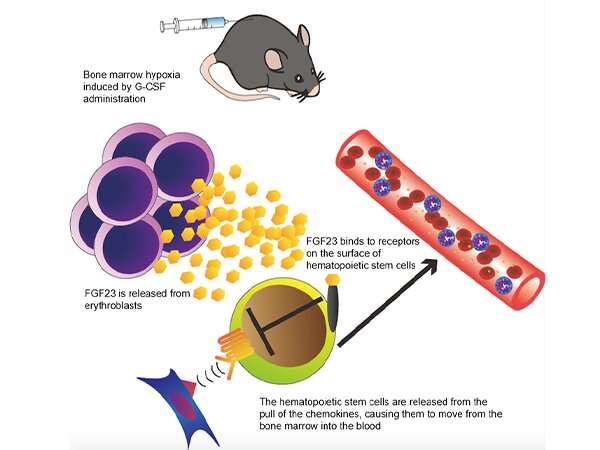 A Kobe University research group including graduate student Ishii Shinichi and Associate Professor Katayama Yoshio (both of the Department of Hematology, Graduate School of Medicine) have discovered that fibroblast growth factor-23 (FGF23) produced by erythroblasts (cells that are the precursors of red blood cells) promotes the movement (mobilization) of hematopoietic stem cells into the peripheral blood. Up until now, FGF23 has been known for the role it plays in the kidneys as a hormone which regulates phosphate concentrations throughout the body.

It is hoped that this discovery will enable new strategies to be developed for harvesting hematopoietic stem cells from bone marrow transplant donors.

These research results were given advanced online publication in the American scientific journal ‘blood‘ on December 23, 2020, prior to the printed version.

According to the textbook definition, fibroblast growth factor-23 is a hormone that is produced by bone-embedded osteocytes and regulates phosphate homeostasis in the kidneys. It is widely known that overproduction of FGF23 results in hereditary hypophosphatemic rickets (otherwise known as vitamin D-resistant rickets) and this can be treated with antibody-based drugs that target FGF23. In recent years, FGF23 has also been used as an indicator of chronic renal failure. However, the effect of FGF23 on bone marrow cells had not yet been clarified.

In order to perform bone marrow transplants, it is necessary to collect hematopoietic stem cells from a donor. Nowadays, G-CSF and Plerixafor (which is a CXCR4 chemokine receptor antagonist) are widely administered to donors in order to cause hematopoietic stem cells to be released from the bone marrow and into the peripheral blood. This makes it possible to harvest the stem cells from the blood, which is safer and less invasive than harvesting them from the bone marrow. However up until now, the mechanism behind this mobilization was only partially understood.

First of all, the research group discovered that when G-CSF was administered to mice, production of FGF23 in the bone marrow greatly increased. Subsequent cell analysis revealed that FGF23 was produced by the majority of erythroblasts inside the bone marrow. Erythroblasts are the precursors of red blood cells.