Would you try the £60 serum designed to spice up your sex life? ‘Lady Viagra’ promises women easier and more intense orgasms – and it was made by a sexpert involved in creating the little blue pill!

A serum touted as being like a lady’s equivalent to Viagra promises women ‘more frequent, intense and satisfying orgasms’.

Vella Women’s Pleasure Serum, which is rubbed on before sex, relaxes the vaginal and clitoral smooth muscle tissue to boost sexual pleasure.

Relaxing the muscles lets more blood flow to them and contributes to feelings of arousal, says the firm behind the therapy.

The £59 tub contains enough product for 16 uses and is said to work for up to two hours. 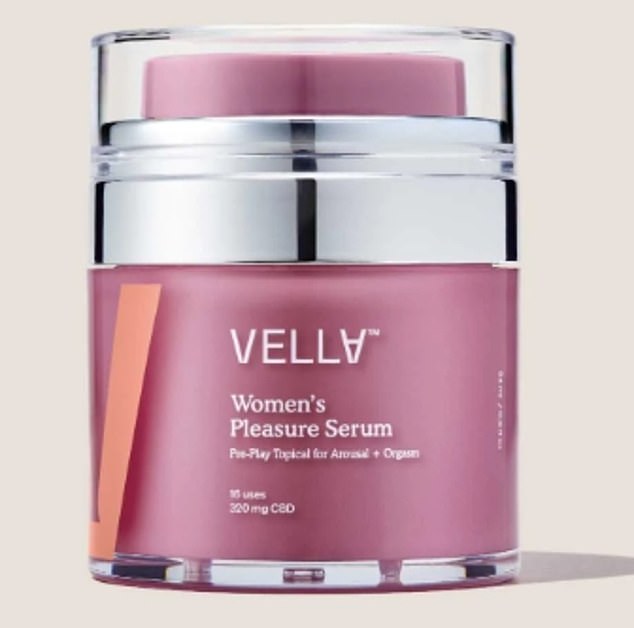 The serum is made from cannabidiol (CBD) — a chemical found in cannabis that cannot get you high. It acts as a natural muscle relaxant.

It has a proprietary liposomal formulation, which means the CBD is contained within tiny fat-like particles that make it easier to penetrate the skin and relax the vaginal and clitoral muscle tissue.

Three pumps of the product is applied to the inner labia, clitoris and external area outside the vagina.

Vella’s range of products have been sold in Britain and the US over the past year.

But now Escentual, an online retailer, is promising women their money back if it fails to spice up their sex lives.

The serum itself was created by Dr Harin Padma-Nathan, a sex researcher who was involved in developing Viagra for men in the 1990s.

He was the lead principal investigator for clinical trials of Viagra, which also works by increasing blood flow to the penis.

How it works is slightly different for women. While Viagra works increasing blood flow to penis, Vella relaxes clitoral and vaginal muscles themselves.

One study of the product found that 18 out of 20 women aged 23 to 75 who applied the serum before sexual activity reported increased ease, intensity and frequency of orgasm.

A further 60 per cent of participants reported increased arousal.

Its serum is made from cannabidiol (CBD), a chemical found in cannabis which cannot get you high.

The CBD — a natural muscle relaxant — is contained within tiny fat-like particles that make it easier to penetrate the skin and target the vaginal and clitoral muscle tissue, according to Vella.

It is safe to taste, use with condoms and lubricants and does not interfere with any medication, Vella says.

However, pregnant and breastfeeding women are advised to speak to their doctor before using the serum.

One married female user told how the serum allowed to orgasm with her husband for the first time in years.

In a review on Vella’s website, she wrote: ‘Hi, I’m Morgan. I haven’t had an orgasm during sex in 2.5 years due to being on anti-depressants.

‘After ordering a single-use (Vella) serum to try it out, I finally was able to have an orgasm with my husband.

‘It was more than that, though. It was a breakthrough for me because I realised that I need to prioritise my pleasure and not just his. I could not be more grateful to the scientists involved in creating this product. 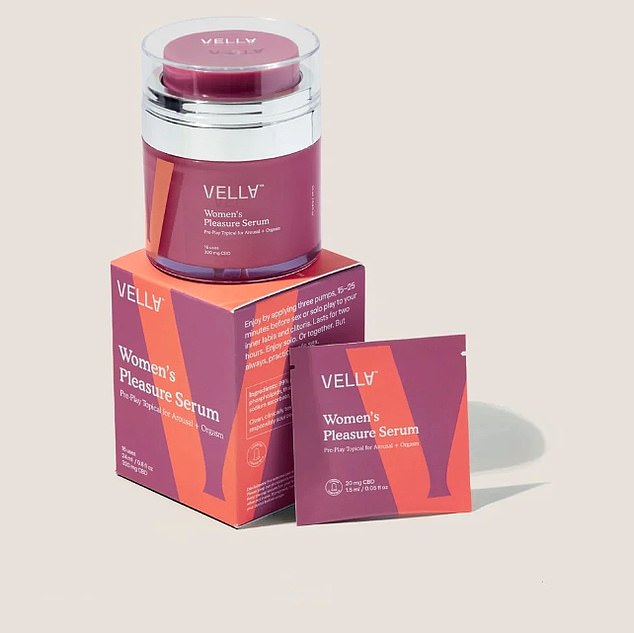 The serum is made from cannabidiol (CBD) — chemical found in cannabis that cannot get you high. It has a proprietary liposomal formulation, which means the CBD is contained within tiny fat-like particles that make it easier to penetrate the skin and target the vaginal and clitoral muscle tissue, which it relaxes

Dr Padma-Nathan, who is also a urologist and specialist in sexual disorders, said he wanted to develop a product for women which would boost female arousal and give better orgasms.

He said: ‘Viagra is a prescription medication that works systemically to treat erectile dysfunction.

‘Rather it works to enhance sexual pleasure from the potential that is already there.

‘We want to give half the world’s population — women — equity in sexual fulfilment in a manner that is safe and effective.

‘We are focused on augmenting a woman’s normal function or recuperating a lot of that function if lost, as in post-menopausal women. And in our studies we found two out of three women overall will respond.’

The first was the introduction of the birth control pills in the 1960s and the second is the development of scientifically proven female arousal products such as the Vella Serum.

‘We hope to see Vella spur a new sexual revolution — one of sexual orgasms, equality and liberation,’ Dr Padma-Nathan added.

Other arousal-boosting therapies dubbed ‘female Viagra’ are already on the market in the US, including the Addyi and Vylessi, which work by targeting brain receptors.

But Addyi needs to be taken daily, while Vylessi is administered through an epipen. And both are for women with a sexual dysfunction, such as hypoactive sexual desire disorder.