A weight-lifting father who lost his leg and fell into a coma for a month following a horrific motorcycle crash has not let his injuries keep him away from the gym.

Marek Roscher had his left leg amputated, a chunk of his hip removed, his stomach stitched together and his arm held in place with metal pins after the smash in June 2016.

The 31-year-old, from Aurich, Germany, was struck by a car at full-speed which catapulted him off his motorcycle and sent him skidding across the road.

He suffered a devastating brain injury when his head smashed on the tarmac, leaving him in a coma for a month.

When he woke up he did not recognise his family and was robbed of his memory and speech.

Mr Roscher spent six months in hospital having daily sessions of physio – to learn to walk with a prosthetic – and speech therapy.

But he has miraculously returned to the gym and continued his six-day-a-week weightlifting regime. 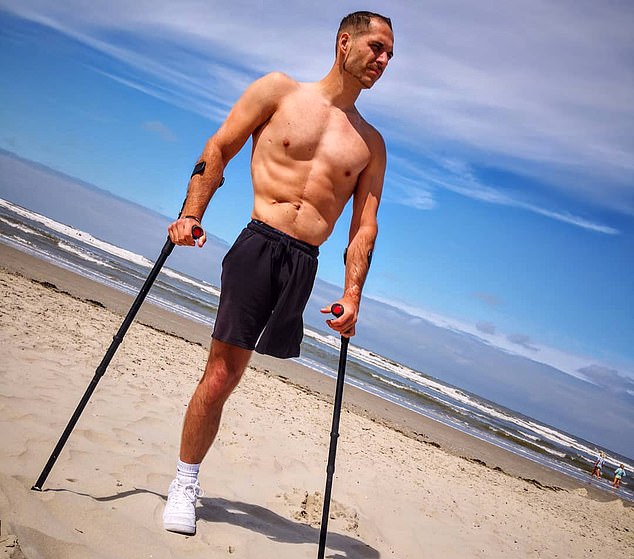 Marek Roscher, from Aurich, Germany, was hit full-speed by a car on the motorway while riding his bike in June 2016 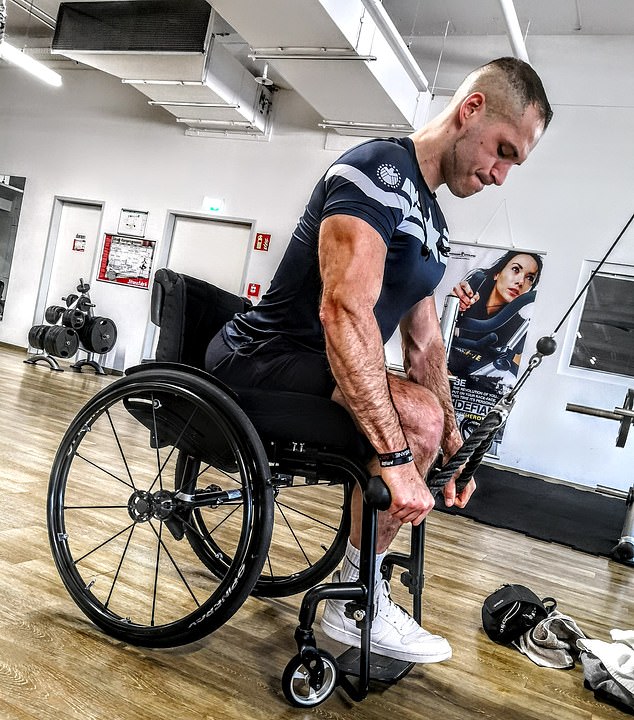 The 31-year-old was catapulted off his motorcycle and sent skidding across the road, smashing his head across the tarmac and suffering a devastating brain injury and losing his left leg 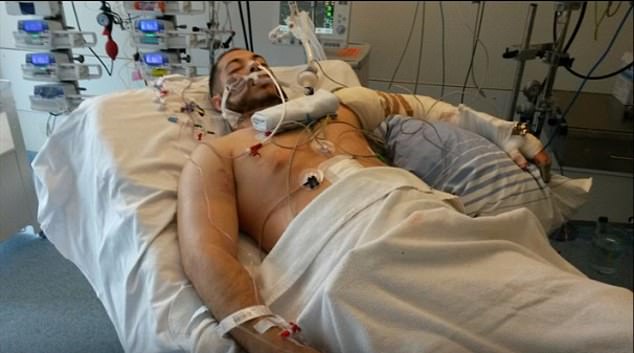 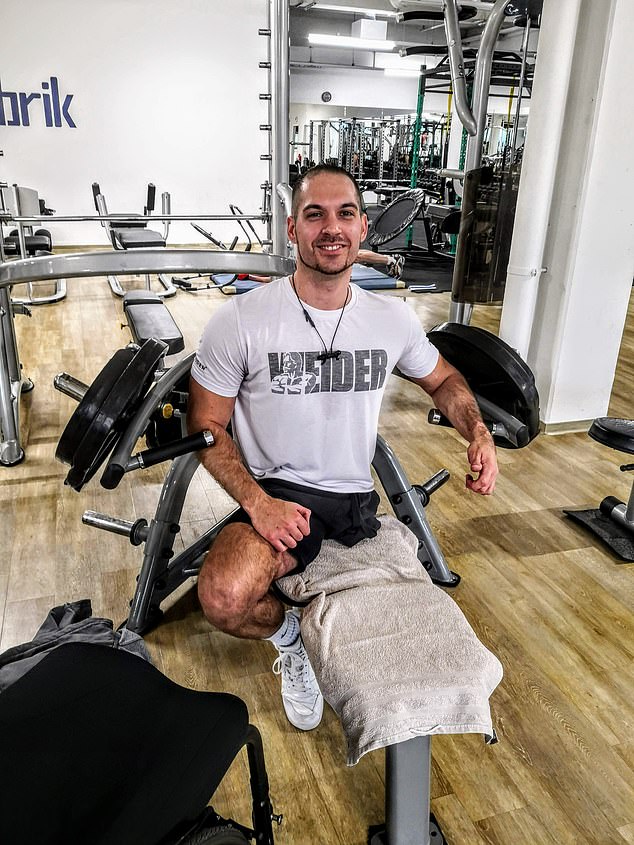 Mr Roscher, who is now wheelchair-bound, but still works out multiple times a week, spent six months in hospital having daily sessions of physiotherapy and speech therapy

Recalling his ordeal, the father said: ‘I was on my way to see friends after work with my ex-girlfriend, we were riding along the road and next thing I know I am hitting the front of a car.

‘To this day I don’t know exactly what happened but that doesn’t matter now as it cannot be undone. I spent a month in a coma and the doctors didn’t know if I was going to wake up or not.

‘When I woke up it was horrible, I could not speak, I did not recognise my friends and family. The only person I recognised was my daughter.

‘The truth was horrible but the only option I had was to fight and keep going. After many visits I slowly began to recognise people like my parents and friends again.’ 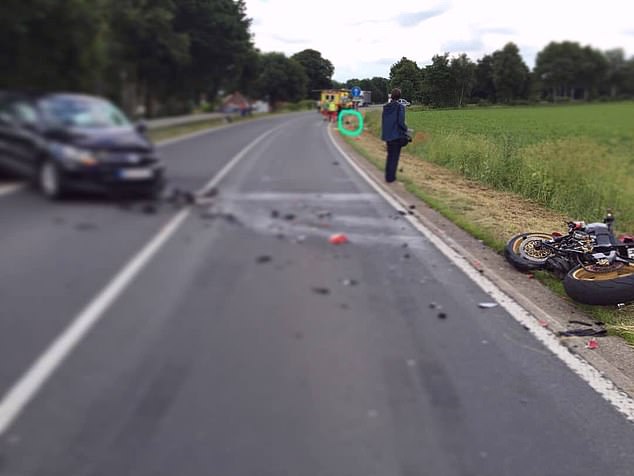 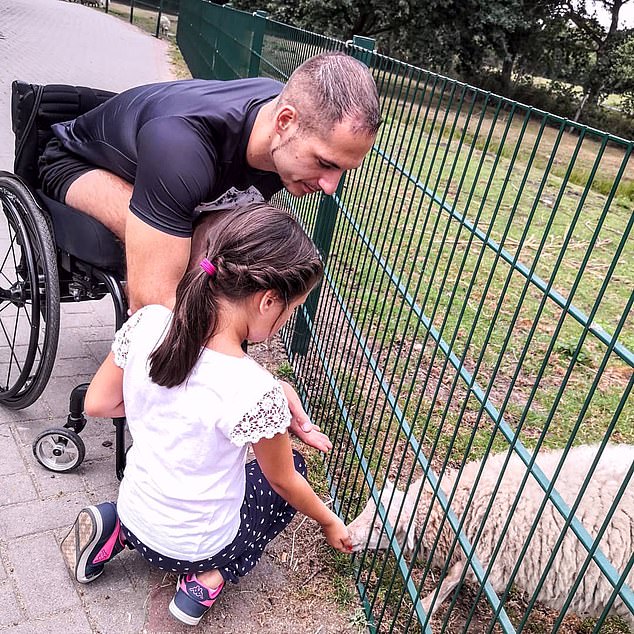 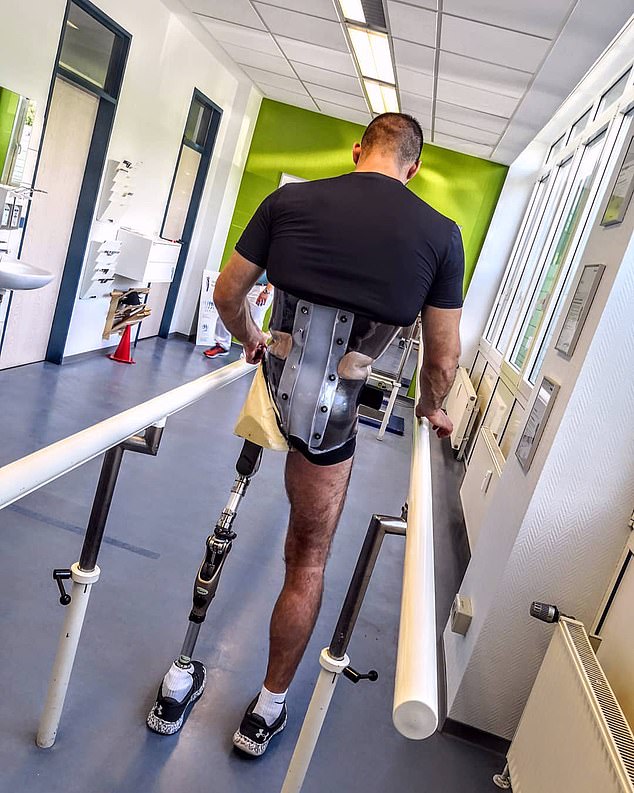 The motorbike crash left him with post-traumatic cerebral infarction, a condition where dead brain tissue forms and clogs up the brain due to restricted blood flow through the arteries. It puts him at high risk of a stroke.

He added: ‘The pain was unbearable and I had to take a lot of morphine to get through each day. I’ve lost count of the number of operations I have had to try and put my body back together.

‘In the hospital I had to learn to speak again, and to move my fingers, eventually learning again to write. I couldn’t write beautifully but at least I could write.’

‘There were so many injuries all at the same time. It’s easier to list things which are working; my right arm and leg are fine but I had a horrible injury to my head leaving me with cerebral infarction, my stomach was torn to pieces, my left arm was smashed as was my left leg, which had to be amputated along with my hip when it became too inflamed. 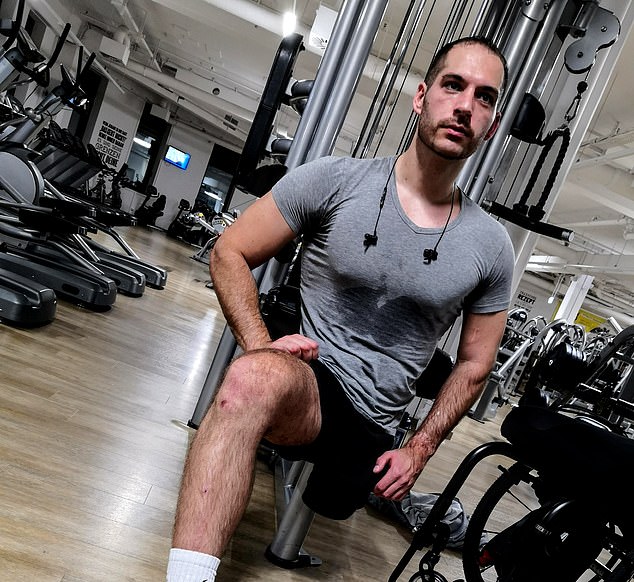 The motorbike crash left him with post-traumatic cerebral infarction, a condition where dead brain tissue forms and clogs up the brain 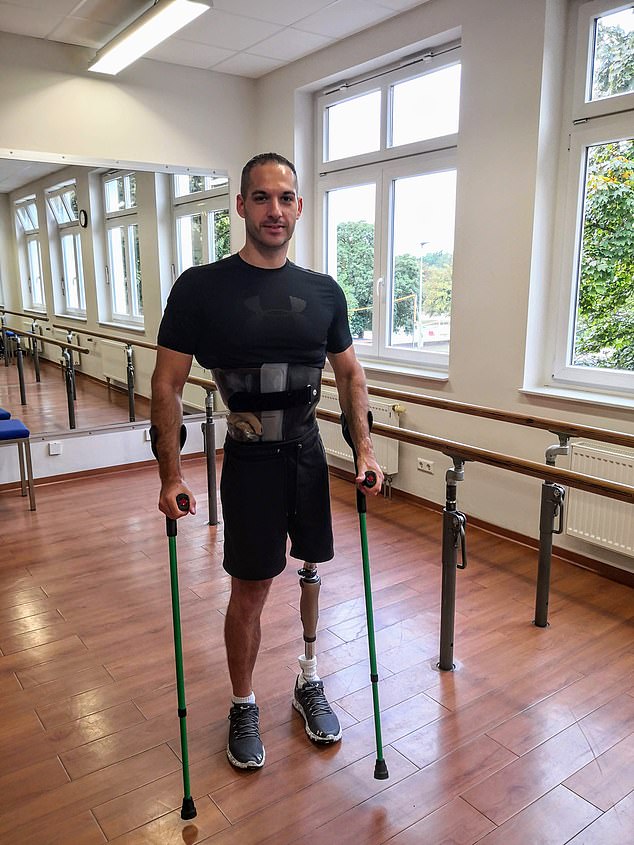 WHAT IS POST-TRAUMATIC CEREBRAL INFARCTION?

A cerebral infarction is an area of necrotic tissue – or dead tissue – in the brain resulting from a blockage or narrowing in the arteries supplying blood and oxygen to the brain.

It occurs after a traumatic head injury such as a car crash.

The blockage can be due to a blood clots or plaque build up in arteries leading to the brain.

Which arteries are problematic will determine which areas of the brain are affected (infarcted). About one third are fatal.

‘My left arm is more metal than flesh and my left bicep isn’t fully functioning. I knew before me the road to recovery would be long.

Before the crash, Mr Roscher spent six days a week in the gym and rode his motorbike at every opportunity he could.

He is slowly returning to his workout regime despite his injuries making several exercises too difficult to perform.

And Mr Roscher is now back to working full-time as an engineer.

The father said he was at peace with his injuries, adding: ‘I see the world completely differently. I am happy with simple things like love and friends and not just material possessions.

‘Most people are proud of me and some people send me messages saying that they are motivated because of my content in social media.

‘Some things are going really well for me like putting on my jacket whilst standing on one foot. I work on things like trying to walk with prosthetics but I can only manage a few steps.

‘Stairs are the most challenging things for me because I’m afraid I will fall. I aim to work on this in the future. The biggest problem is my memory but I can do many tasks to help recover it like reading and writing.

‘I fought and fought to get to where I am today and now my head has healed so well I can once again drive my car.

‘I also got my old job back and now I work for the company five days a week just like anyone else.

‘Both before and also after the crash I worked out every day. The doctor thinks that’s the reason I survived the accident; my body was strong enough to overcome the long list of injuries I suffered.’