An extra portion of fruit or veg a day can cut your risk of developing diabetes by a QUARTER, study finds

Eating your fruit and veg dramatically cuts the risk of developing diabetes, a major study has found.

And even small increases in intake can make a significant difference.

A study by Cambridge University found boosting consumption of fruit and veg by one small daily portion cuts the risk of type 2 diabetes by 25 per cent.

The research team found every 66g increase in consumption cut diabetes risk by a quarter.

In Britain a portion of vegetables or fruit is defined as 80g – equivalent to three tablespoons of cooked carrots, two spears of broccoli or a small apple. 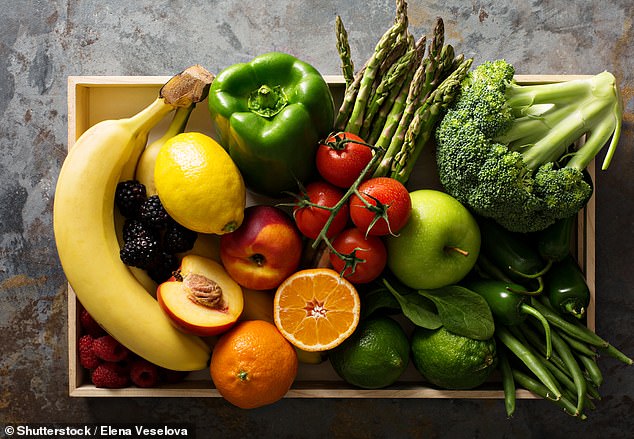 Scientists at Cambridge University found that boosting consumption of fruit and vegetables by one small daily portion cut the risk of type 2 diabetes by 25 per cent. (Stock image)

The team, writing in the British Medical Journal, said: ‘Fruit and vegetable intake, rather than vitamin supplements, is potentially beneficial for the prevention of type 2 diabetes.’

Harvard Medical School estimated that one serving a day of wholegrain breakfast cereal – such as porridge or a cereal biscuit – would cut the risk by 19 per cent.

Some 9,754 people with Type 2 diabetes were compared with a group of 13,662 people without the condition, all of whom were part of the European Prospective Investigation into Cancer and Nutrition (EPIC)-InterAct study in eight European countries.

A score based on how much fruit and veg people ate was used to determine the risk between five separate groups.

Those in the lowest group typically ate 274g of fruit and veg per day, while those in the highest group ate almost twice this amount (508g per day), and had the most benefit – a 50 per cent reduction in Type 2 diabetes risk.

Eating 274g is about the weight of one medium banana, half a head of broccoli and a small handful of cherry tomatoes. 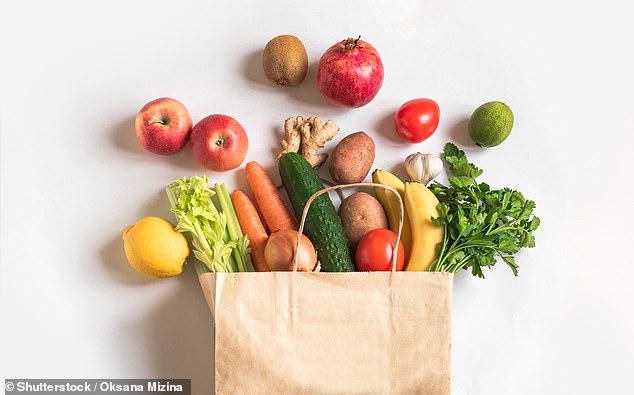 A second study by Harvard Medial School also estimated that one serving a day of wholegrain breakfast cereal  would cut the risk by 19 per cent. (Stock image)

However, the researchers found that even those who ate less than 508g per day could lower their risk of diabetes by eating modest amounts more than what they were already doing.

The researchers calculated that every 66g per day increase in total fruit and vegetable intake was associated with a 25 per cent lower risk of developing Type 2 diabetes compared to what they were eating before.

In the second study, researchers in the US, including from the Harvard school of public health, looked at whole grain intake and the risk of Type 2 diabetes.

After adjusting for lifestyle and dietary risk factors for diabetes, those with the highest intake of whole grains had a 29% lower rate of Type 2 diabetes compared with those who ate the least.

For individual whole grain foods, the researchers found that consuming one or more servings a day of whole grain cold breakfast cereal or dark bread was associated with a lower risk of Type 2 diabetes (19% and 21% respectively) compared with consuming less than one serving a month.

The researchers said the association between higher total whole grain intake and lower risk of Type 2 diabetes ‘was stronger in individuals who were lean than in those who were overweight or obese.’

They said the reduced risk held true even when other factors such as how much exercise people did was taken into account, alongside their family history of diabetes.

Emma Elvin, senior clinical adviser at Diabetes UK, said: ‘While there are some risk factors for Type 2 diabetes you can’t change such as your age, ethnic background and family history, we know that around three in five cases can be prevented or delayed by making lifestyle changes such as adopting healthier eating habits, increasing activity levels and getting support to manage a healthy weight.

‘These new research findings provide yet more evidence that eating plenty of fruit and vegetables, and choosing wholegrain foods, such as wholegrain breakfast cereals, oats, brown rice and wholemeal bread, is associated with a reduced risk of developing Type 2 diabetes.

‘Even more encouraging, these studies show that it can take fairly small increases in consumption of such foods for them to be beneficial and to help reduce the risk.

‘The 12.3 million people at increased risk of developing Type 2 diabetes in the UK should absolutely be supported to manage a healthy weight, get regular physical activity and eat healthy foods to help them reduce their risk of developing a condition that can sometimes have devastating consequences for those living with it.’