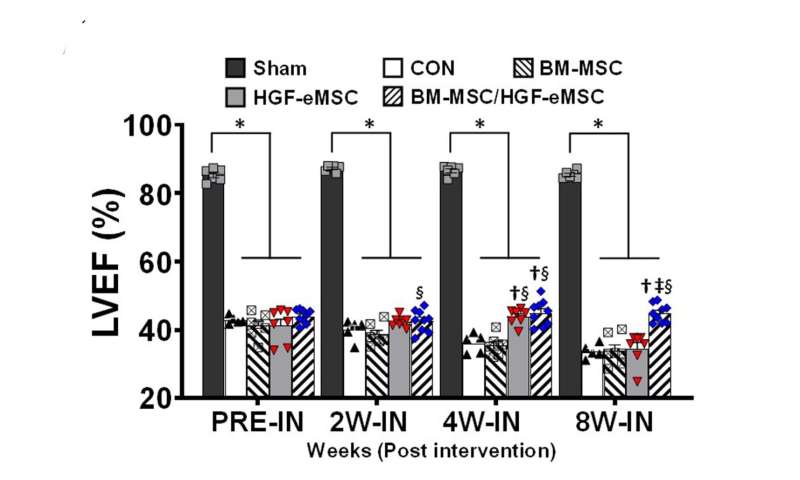 Human stem cells have been regarded as a promising cell source for cardiac regeneration therapy. But their clinical use is hampered due to poor performance after transplantation into failing hearts. Recently, a stem cell biologist from City University of Hong Kong (CityU), together with his collaborators, has developed a novel strategy called in vivo priming to “train” the stem cells to remain strong after implantation to the damaged heart via a 3-D-printed bandage-like patch. The positive results of the study show that an in vivo priming strategy can be an effective means to enhance cardiac repair.

Regeneration is a promising strategy to treat myocardial infarction by injecting human stem cells directly into the failing hearts. In particular, human mesenchymal stem cells (hMSCs) have been considered as a competitive agent for clinical uses for their proven safety and significant paracrine effects supporting new blood vessel formation and inhibiting cell death. However, “the clinical trial results are disappointing as the micro-environment of a failing heart is very harsh for the injected hMSCs to stay alive,” said Dr. Ban.

Therefore, researchers have been exploring ways to increase the survival rate of hMSCs in failing hearts. “Priming, or so-called preconditioning, is a common strategy to empower the cells. The cells are educated through particular stimulations, and when they are relocated to tough environments, they are much stronger against bad conditions and know how to react because of their previous experiences,” explained Dr. Ban.

Conventionally, priming is performed in vitro (outside a living organism) before the cells are transplanted into the heart. “But the effects of priming done in this way usually last for two or three days only. To extend the duration of the priming effect, I have come up with an idea of in vivo priming, which means the hMSCs are primed directly on the failing hearts,” said Dr. Ban. 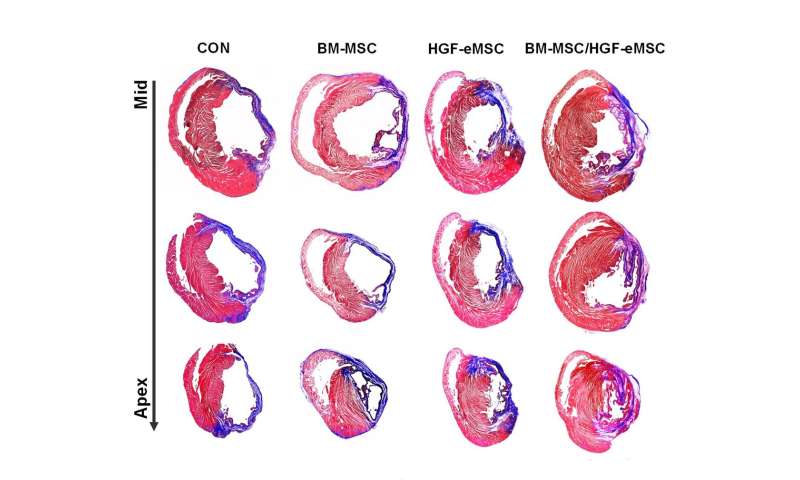 The patch was then implanted like a bandage on the top of the infarct area of the myocardial-infarction-induced hearts of rats. “The genetically engineered MSCs can continuously secret human HGF protein to prime the hMSCs within the patch and make them stronger,” said Dr. Ban.

Instead of directly injecting the genetically engineered cells into the heart, he added that encapsulating the cells in the patch for placement on the surface of the heart can prevent mutations or other undesirable outcomes. And the patch is fabricated by 3-D-printing of pig heart-derived extracellular matrix hydrogel, simulating the cardiac tissue-specific micro-environment.

It was found that the primed hMSCs had a higher survival rate compared with unprimed ones in the patches attached to the failing hearts. Those empowered hMSCs released greater amounts of paracrine factors beneficial for repairing damaged cardiac muscle tissues and regenerating vasculatures.

“We found that the primed cells can survive even after eight weeks in the patch after implantation to the heart. Also, there is a significant improvement in cardiac function as well as vessel regeneration comparing to the unprimed cells,” said Dr. Ban. 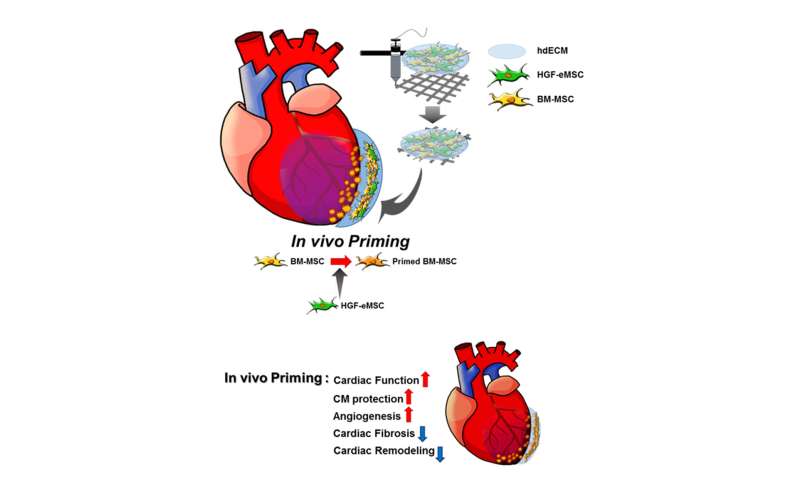