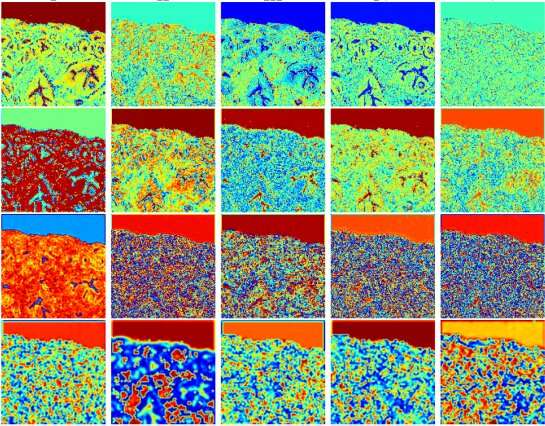 Tissue biopsy slides stained using hematoxylin and eosin (H&E) dyes are a cornerstone of histopathology, especially for pathologists needing to diagnose and determine the stage of cancers. A research team led by MIT scientists at the Media Lab, in collaboration with clinicians at Stanford University School of Medicine and Harvard Medical School, now shows that digital scans of these biopsy slides can be stained computationally, using deep learning algorithms trained on data from physically dyed slides.

Pathologists who examined the computationally stained H&E slide images in a blind study could not tell them apart from traditionally stained slides while using them to accurately identify and grade prostate cancers. What’s more, the slides could also be computationally “de-stained” in a way that resets them to an original state for use in future studies, the researchers conclude in their May 20 study published in JAMA Network Open.

This process of computational digital staining and de-staining preserves small amounts of tissue biopsied from cancer patients and allows researchers and clinicians to analyze slides for multiple kinds of diagnostic and prognostic tests, without needing to extract additional tissue sections.

“Our development of a de-staining tool may allow us to vastly expand our capacity to perform research on millions of archived slides with known clinical outcome data,” says Alarice Lowe, an associate professor of pathology and director of the Circulating Tumor Cell Lab at Stanford University, who was a co-author on the paper. “The possibilities of applying this work and rigorously validating the findings are really limitless.”

The researchers also analyzed the steps by which the deep learning neural networks stained the slides, which is key for clinical translation of these deep learning systems, says Pratik Shah, MIT principal research scientist and the study’s senior author.

“The problem is tissue, the solution is an algorithm, but we also need ratification of the results generated by these learning systems,” he says. “This provides explanation and validation of randomized clinical trials of deep learning models and their findings for clinical applications.”

To create computationally dyed slides, Shah and colleagues have been training deep neural networks, which learn by comparing digital image pairs of biopsy slides before and after H&E staining. It’s a task well-suited for neural networks, Shah said, “since they are quite powerful at learning a distribution and mapping of data in a manner that humans cannot learn well.”

Shah calls the pairs “siblings,” noting that the process trains the network by showing them thousands of sibling pairs. After training, he said, the network only needs the “low-cost, and widely available easy-to-manage sibling,”— non-stained biopsy images—to generate new computationally H&E stained images, or the reverse where an H&E dye stained image is virtually de-stained.

In the current study, the researchers trained the network using 87,000 image patches (small sections of the entire digital images) scanned from biopsied prostate tissue from 38 men treated at Brigham and Women’s Hospital between 2014 and 2017. The tissues and the patients’ electronic health records were de-identified as part of the study.

When Shah and colleagues compared regular dye-stained and computationally stained images pixel by pixel, they found that the neural networks performed accurate virtual H&E staining, creating images that were 90-96 percent similar to the dyed versions. The deep learning algorithms could also reverse the process, de-staining computationally colored slides back to their original state with a similar degree of accuracy.

“This work has shown that computer algorithms are able to reliably take unstained tissue and perform histochemical staining using H&E,” says Lowe, who said the process also “lays the groundwork” for using other stains and analytical methods that pathologists use regularly.

Computationally stained slides could help automate the time-consuming process of slide staining, but Shah said the ability to de-stain and preserve images for future use is the real advantage of the deep learning techniques. “We’re not really just solving a staining problem, we’re also solving a save-the-tissue problem,” he said.

Software as a medical device

“The fact that diagnoses with higher accuracy were able to be rendered on digitally stained images speaks to the high fidelity of the image quality,” Lowe says.

Another important part of the study involved using novel methods to visualize and explain how the neural networks assembled computationally stained and de-stained images. This was done by creating a pixel-by-pixel visualization and explanation of the process using activation maps of neural network models corresponding to tumors and other features used by clinicians for differential diagnoses.

This type of analysis helps to create a verification process that is needed when evaluating “software as a medical device,” says Shah, who is working with the U.S. Food and Drug Administration on ways to regulate and translate computational medicine for clinical applications.