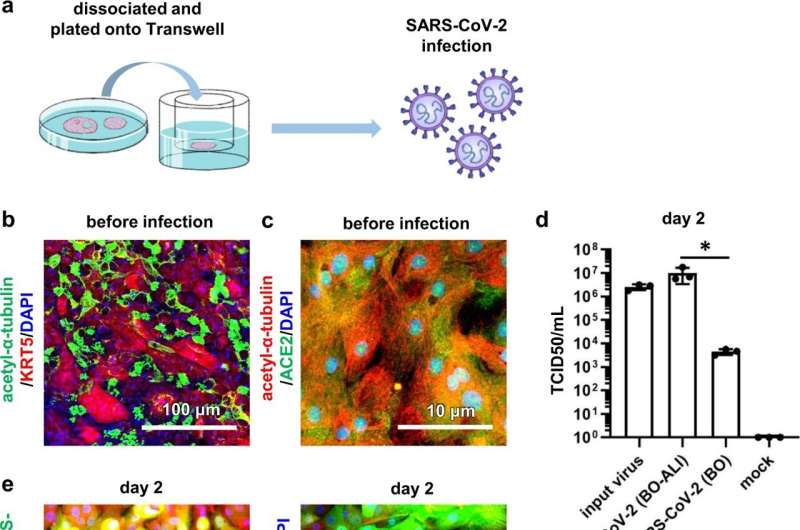 The group led by Dr. Kazuo Takayama developed two in vitro models to study SARS-CoV-2, a bronchial organoids model (BO) and a BO-derived air-liquid interface model (BO-ALI), and showed that they can be used for drug screening for infectious diseases including COVID-19.

In this study, the research team developed two human bronchial models, BO and BO-ALI. SARS-CoV-2 infection experiments confirmed that the infection efficiency in BO-ALI was more than 2,000 times higher than that in BO. The researchers confirmed the anti-viral effect of therapeutic agents such as remdesivir, molnupiravir, and camostat, using BO-ALI. Comparative analyses of eight SARS-CoV-2 variants, including the omicron strain, showed that the infection efficiency in BO-ALI of the omicron was slightly lower than those of the other variants.

Next, in attempting to identify the cells that SARS-CoV-2 infects, the researchers found that the virus efficiently infects ciliated cells but rarely infects basal cells. They also discovered that nearly all ciliated cells died subsequently whereas basal cells survived and differentiated into bronchial epithelial cells, including ciliated cells. The regenerative capacity of basal cells was dependent on fibroblast growth factor 10 (FGF10).

These findings suggest that BO-ALI produced from BO can be used to evaluate COVID-19 therapeutics, analyze SARS-CoV-2 variants, and study bronchial tissue regeneration.