Coronavirus may have been sending people in Los Angeles to ERs before Christmas and circulating in the county months earlier than the first reported case, study suggests

Coronavirus likely arrived in Los Angeles before Christmas of last year – and may have been circulating in the area months before the first case was officially diagnosed, new research suggests.

Doctors at University of California, Los Angeles (UCLA) Health found a spike patients with cough and lung failure beginning in December, which continued through February.

During those months, there were 50 percent more of these cases than the hospital system had seend during that period for the previous five years.

The study suggests that between December and February, there may have been as many as 1,000 coronavirus patients in Los Angeles. 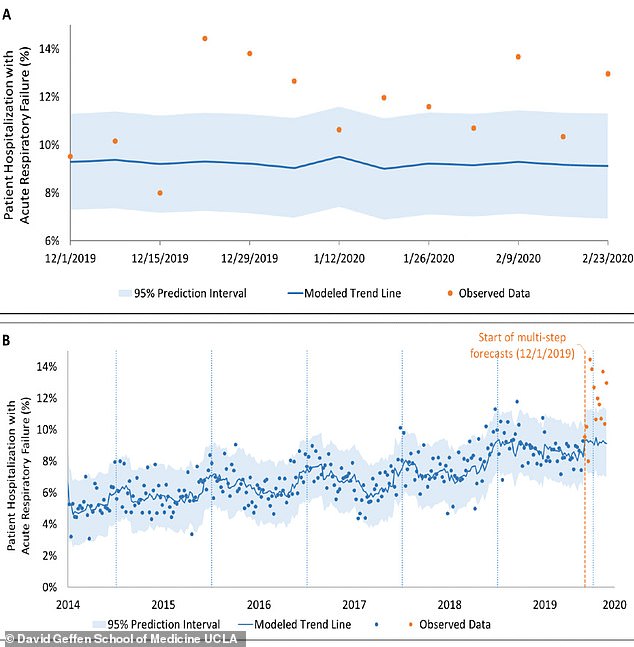 Los Angeles hospitals saw 50% more coughing patients in December 2019 through February 2020 than in years prior (bottom, orange) and 18 more cases of lung failure than usual (top)

The populous  California county is still seeing nearly 700 new cases a day, although its new daily infections are finally starting to decline.

More than 6,000 people have died of COVID-19 in Los Angeles, with another fatalities reported yesterday.

The first coronavirus case in LA county was identified on January 26, in a 38-year-old man from Wuhan who was only in the city for a layover at LAX with his family on their way home from vacation in Mexico.

His illness hit suddenly while at the massive airport on January 22, and he asked a customs officer for help. He was whisked away to Cedars-Sinai Medical Center where his location was known to few for weeks, the Los Angeles Times reported.

It was a busy flu season for county hospitals, but for five weeks, the traveler remained the only coronavirus case in LA.

A second case wasn’t confirmed in the county until March 3. The next day, California’s governor, Gavin Newsom, declared a statewide of emergency.

But the new study, published in the Journal of Medical Internet Research, suggests that some of those suspected flu cases keeping the LA emergency rooms busy were actually COVID-19. 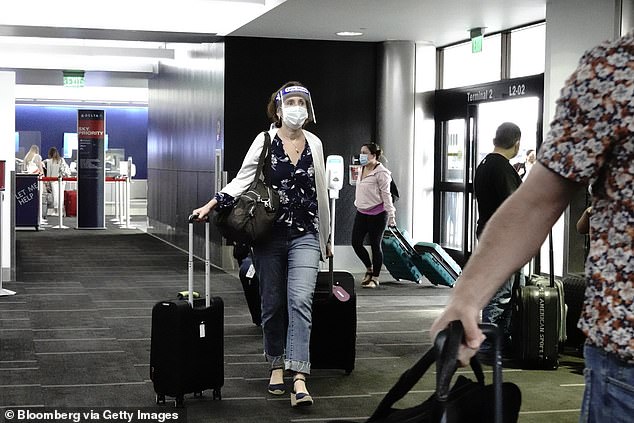 The first case of coronavirus in Los Angeles was not detected until January 26, when a passenger flying through LAX (airport pictured; patient not pictured) was whisked away to isolation

Visits to clinics for coughs exceeded the average number of outpatient visits for similar complaints during that same period by more than 50 percent.

Coughs were cropping up in similarly higher numbers in ERs, too.

And 18 more patients than  would have been expected in a typical year had to be hospitalized for acute respiratory failure.

The researchers noted that, at the time, LA hospitals were also seeing more cases  of cough and respiratory illness suspected of being caused by vaping, although rates  e-cigarette use had started falling in the county since September 2019. 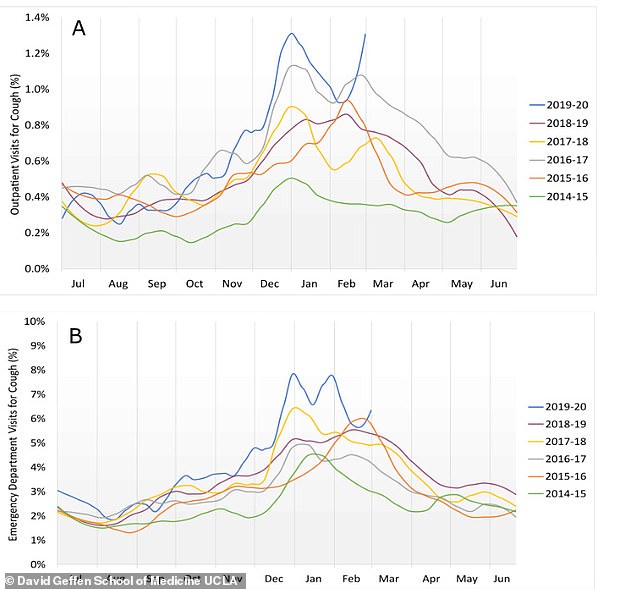 But her findings suggest that at least some cases of cough and respiratory distress in LA were linked to the pandemic – and keeping an eye out for similar upticks could help health officials identify outbreaks of COVID-19.

‘Technology, including artificial intelligence powered by machine learning, has further potential to identify and track irregular changes in health data, including significant excesses of patients with specific disease-type presentations in the weeks or months prior to an outbreak.’