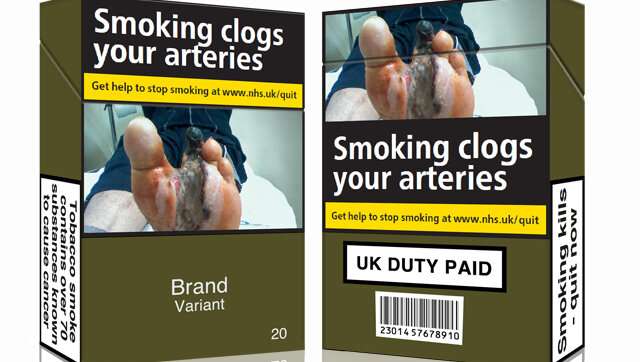 The introduction of standardized packaging for cigarettes in the UK, combined with stricter taxation measures on cheaper cigarettes, has led to a significant fall in sales for cigarettes, according to new analysis from researchers at the University of Bath.

By analyzing sales data over three years from May 2015 to April 2018, the researchers from the Tobacco Control Research Group found that pre-legislation, cigarette sales (calculated by individual cigarettes) declined on average by 12 million a month; after legislation, this decrease accelerated sharply to 20 million a month.

The team behind the new study, published today (Monday 13 July) in the BMJ journal Tobacco Control, suggest their findings demonstrate the public health benefits that standardized packaging coupled with taxation can bring in reducing tobacco consumption. They hope their findings can provide important evidence to policymakers around the world of the effectiveness of standardized packaging.

Study findings also suggest that the tobacco industry’s net revenue (which is an indication of profits once taxes have been paid) fell by 13% after implementation, from £231M to £198M per month.

Professor Gilmore comments: “Governments around the world considering plain packaging can be reassured that this policy works and that the real reason the industry opposes this legislation so vehemently is because it threatens its profitability. With coronavirus already posing a threat to tobacco company sales, and plain packaging of tobacco taking off in other jurisdictions, our findings are more bad news for tobacco companies.”

Previous research from the group showed that prices of the cheapest cigarette brands rose around May 2017 as the tobacco industry adjusted to manage the incoming MET. This latest analysis suggests that as these cheapest brands increased in price, they became less appealing and growing sales ended.

Lead researcher on the new study, Dr. Rosemary Hiscock also from the Tobacco Control Research Group at the University, adds: “Falling tobacco industry revenues suggest the new legislation has played a role in stopping formerly lucrative brand differentiation. For many years, the tobacco industry had used packaging to signal the difference between premium and cheap cigarette brands, with smokers often willing to pay markedly more for premium brands.

“This allowed the tobacco industry to make enough profit on premium brands to subsidize its cheap brands, keeping them cheap enough for young people to afford to start smoking and to prevent price conscious smokers from being incentivised to quit. Standardized packaging has weakened the appeal of premium brands, on which the tobacco companies made more profits, and the MET has forced cheap brands to become more expensive. This implies that the legislation should play a role in reducing the prevalence of smoking and its consequences (illness and premature death).”

Additional findings from the study suggest that sales of roll-your-own (RYO) tobacco have been growing steadily but this growth was not enough to compensate for the decline in cigarette sales.

In view of the continuing imbalance between taxes on cigarettes and roll-your-own tobacco, economist, tobacco tax expert and author on the study, Dr. Rob Branston, adds: “Now that the MET has addressed cheaper factory-made cigarettes, the government also needs to increase RYO taxes. Currently, price-sensitive smokers can still switch to using cheap RYO cigarettes instead of quitting. These are just as deadly as factory-made cigarettes but are currently taxed at a significantly lower rate. There is no evidence that the resulting higher prices would cause RYO smokers to turn to illicit products.”