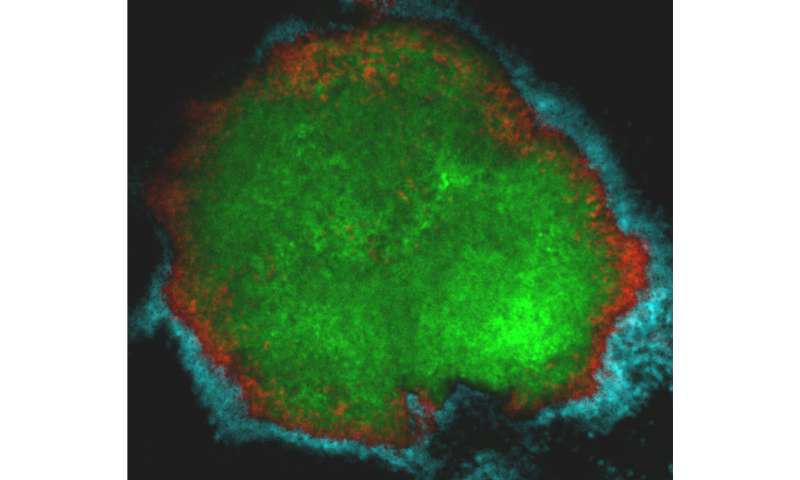 Studying bacteria in a petri dish or test tube has yielded insights into how they function and, in some cases, contribute to disease. But this approach leaves out crucial details about how bacteria act in the real world.

Taking a translational approach, researchers at the University of Pennsylvania School of Dental Medicine and the Georgia Institute of Technology imaged the bacteria that cause tooth decay in three dimensions in their natural environment, the sticky biofilm known as dental plaque formed on toddlers’ teeth that were affected by cavities.

The work, published in the journal Proceedings of the National Academy of Sciences, found that Streptococcus mutans, a major bacterial species responsible for tooth decay, is encased in a protective multilayered community of other bacteria and polymers forming a unique spatial organization associated with the location of the disease onset.

“We started with these clinical samples, extracted teeth from children with severe tooth decay,” says Hyun (Michel) Koo of Penn Dental Medicine, a co-senior author on the work. “The question that popped in our minds was, how these bacteria are organized and whether their specific architecture can tell us about the disease they cause?”

To address this question, the researchers, including lead author Dongyeop Kim of Penn Dental Medicine and co-senior author Marvin Whiteley of Georgia Tech, used a combination of super-resolution confocal and scanning electron microscopy with computational analysis to dissect the arrangement of S. mutans and other microbes of the intact biofilm on the teeth. These techniques allowed the team to examine the biofilm layer by layer, gaining a three-dimensional picture of the specific architectures.

This approach, of understanding the locations and patterns of bacteria, is one that Whiteley has pursued in other diseases.

“It’s clear that identifying the constituents of the human microbiome is not enough to understand their impact on human health,” Whiteley says. “We also have to know how they are spatially organized. This is largely under studied as obtaining intact samples that maintain spatial structure is difficult.”

In the current work, the researchers discovered that S. mutans in dental plaque most often appeared in a particular fashion: arranged in a mound against the tooth’s surface. But it wasn’t alone. While S. mutans formed the inner core of the rotund architecture, other commensal bacteria, such as S. oralis, formed additional outer layers precisely arranged in a crownlike structure. Supporting and separating these layers was an extracellular scaffold made of sugars produced by S. mutans, effectively encasing and protecting the disease-causing bacteria.

“We found this highly ordered community with a dense accumulation of S. mutans in the middle surrounded by these ‘halos’ of different bacteria, and wondered how this could cause tooth decay,” Koo says. “

To learn more about how structure impacted the function of the biofilm, the research team attempted to recreate the natural plaque formations on a toothlike surface in the lab using S. mutans, S. oralis, and a sugar solution. They successfully grew rotund-shaped architecture and then measured levels of acid and demineralization associated with them.

“What we discovered, and what was exciting for us, is that the rotund areas perfectly matched with the demineralized and high acid levels on the enamel surface,” says Koo. “This mirrors what clinicians see when they find dental caries: punctuated areas of decalcification known as ‘white spots.’ The domelike structure could explain how cavities get their start.”

The study’s findings may help researcher more effectively target the pathogenic core of dental biofilms but also have implications for other fields.

“It demonstrates that the spatial structure of the microbiome may mediate function and the disease outcome, which could be applicable to other medical fields dealing with polymicrobial infections,” says Koo.

“It’s not just which pathogens are there but how they’re structured that tells you about the disease that they cause,” adds Whiteley. “Bacteria are highly social creatures and have friends and enemies that dictate their behaviors.”