Marijuana has long had a reputation for helping people be more ‘chill’ – and now science is beginning to back up that claim.

Vanderbilit University researchers found that cannabis can cut down connections between parts of the brain known to stoke anxiety.

Depending on which country or US state you live in, marijuana is approved for medical use for only a certain conditions.

Though many users swear by marijuana’s soothing effects, research like the new Vanderbilt study stands to help the drug get the formal seal of approval for treating additional conditions. 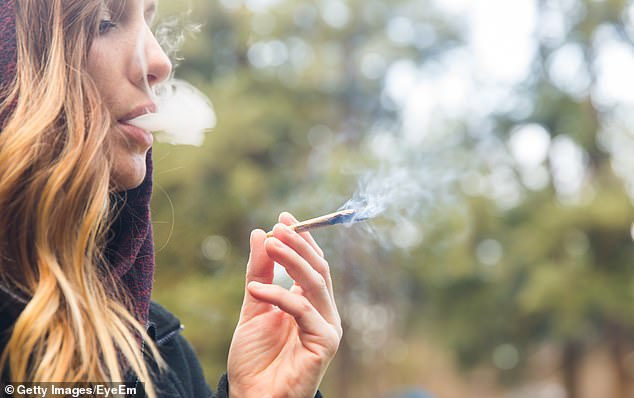 For all the hype and claims of benefits around marijuana, much remains unproven about what it can effectively treat, and how.

It varies from state to state but, in New York, for example, medical marijuana prescriptions are only permitted for treating:

And even for these approved uses, there are some caveats.

The Food and Drug Administration (FDA), meanwhile, has only approved one that contains active cannabis ingredients, and that medication is only for the treatment of seizure disorders.

But scientists have been unsure how the compounds in cannabis might act on the brain for other benefits, despite studies suggesting these links.

Researchers at Vanderbilt were already familiar with a sort of stress-anxiety superhighway in the brain, and decided to test whether marijuana might be able to alter these connections.

The link they were interested in was between the amygdala and the frontal cortex.

The amygdala plays a crucial role in the brain’s regulation of many emotions, chiefly those related to fear.

Our frontal cortex wears many hats, including our impulse control, memory, problem solving and social behavior.

‘The circuit between the amygdala and the frontal cortex has been shown to be stronger in individuals with certain types of anxiety disorders,’ said Dr Sachin Patel, study co-author and the director of the Division of General Psychiatry at Vanderbilt University Medical Center.

‘As people or animals are exposed to stress and get more anxious, these two brain areas glue together, and their activity grows stronger together.’

The brain has a built-in network that responds to marijuana, called the endocannibinoid system.

Among the elements that make up this system is 2-AG, a molecule that helps to regulate how the amygdala and frontal cortex interact.

When the researchers put mice under stress, they saw these connections grow stronger.

But when they boosted the mice’s levels of 2-AG, the scientists were able to break short circuit these connections and reduce the mice’s anxiety levels.

‘We might predict there’s a collapse in the endocannabinoid system, which includes 2-AG, in the patients that go on to develop a disorder,’ said Dr Patel.

‘But, not everyone develops a psychiatric disorder after trauma exposure, so maybe the people who don’t develop a disorder are able to maintain that system in some way. Those are the things we’re interested in testing next.’

On one hand, their study offers an explanation for why weed might really be a key to lowering anxiety.

On the other, the scientists think they’re discovery could help them develop an anxiety therapy that could cut out marijuana from the equation.