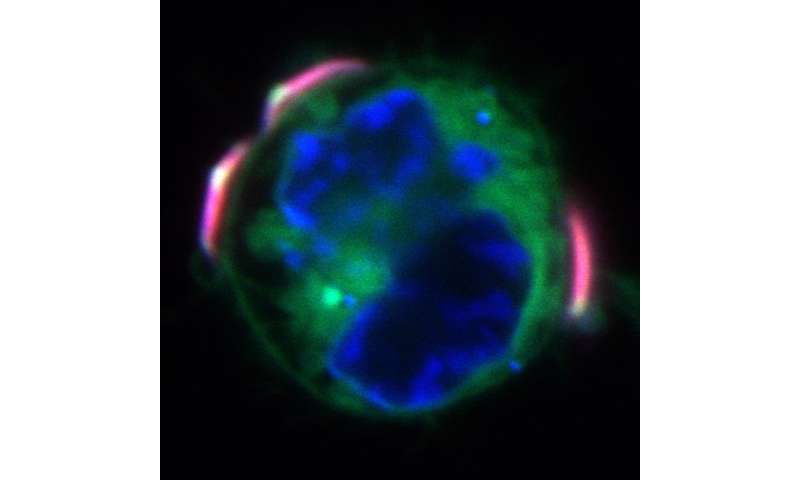 Macrophages are immune cells that patrol the body looking for potential threats like viruses, bacteria, and cancer cells, and engulf and destroy them. However, cancerous tumors have a nasty trick up their sleeves: they secrete substances that “switch” arriving macrophages from their tumor-killing state to a tumor-promoting state, in which they suppress the body’s immune response, drive the growth of blood vessels to supply the tumor, and help the tumor metastasize. Efforts to extract macrophages from the body, force them into their tumor-killing state, and reintroduce them to fight cancer have failed, as the tumors relentlessly switch them back to their pro-tumor state.

Now, researchers at Harvard’s Wyss Institute for Biologically Inspired Engineering and John A. Paulson School of Engineering and Applied Sciences (SEAS) have created a new solution to this problem: cytokine-secreting “backpacks” for macrophages that keep them in their tumor-killing state for up to five days after they arrive at a tumor site, and have been found to slow tumor growth and reduce metastasis in mice with an aggressive form of breast cancer. The results are published today in Science Advances.

“This study speaks to the beauty of macrophages—they are highly adaptable cells that respond very strongly to stimuli in their environment, but this can also be a problem when they receive a stimulus that tells them to do something that’s actually harmful to the body, like helping cancer grow or metastasize,” said first author C. Wyatt Shields, Ph.D., an Assistant Professor at the University of Colorado, Boulder who completed the study as a Postdoctoral Fellow in the lab of Wyss Core Faculty member Samir Mitragotri, Ph.D. “We have shown that it’s possible to provide a sustained stimulus via these backpack particles to keep macrophages in their desired state, and we hope that this technique could one day be used to treat a variety of conditions related to immune dysfunction.”

Macrophages are ravenous cells, binding to and eating anything they recognize as foreign to the body. Previous work from the Mitragotri lab showed that, surprisingly, small particles that are disc-shaped can hitch a ride on macrophages for several days without triggering their “eat me” response, and could offer an opportunity to influence the macrophages’ behavior. For this study, the team constructed backpacks made of two layers of the biocompatible polymer poly(lactic-co-glycolic) acid (PLGA) with a “filling” of polyvinyl alcohol (PVA) and the cytokine interferon gamma (IFNγ) sandwiched between them. IFNγ is known to be a potent stimulator of the pro-inflammatory response in macrophages, and has been shown to reduce the sizes of some tumors. To finish off the backpacks, a final cell-adhesive layer was added to help them stick to their macrophage mounts.

Shields and his co-authors mixed macrophages with their backpack particles in vitro, and found that about 87% of the cells picked up one to four backpacks on their surfaces, which remained there for at least five days without being consumed and secreted IFNγ for at least 60 hours. They then tested the macrophages for various markers that indicated that they were in a proinflammatory (M1) state that combats tumors, or an anti-inflammatory (M2) state. Macrophages carrying IFNγ backpacks expressed three M1-associated traits much more strongly than macrophages with blank backpacks or macrophages in the presence of free IFNγ, while their expression of M2-associated traits did not change significantly. Their increased M1-trait expression also lasted longer than either of the control groups’, suggesting that the IFNγ backpacks could induce a lasting shift to the M1 state. 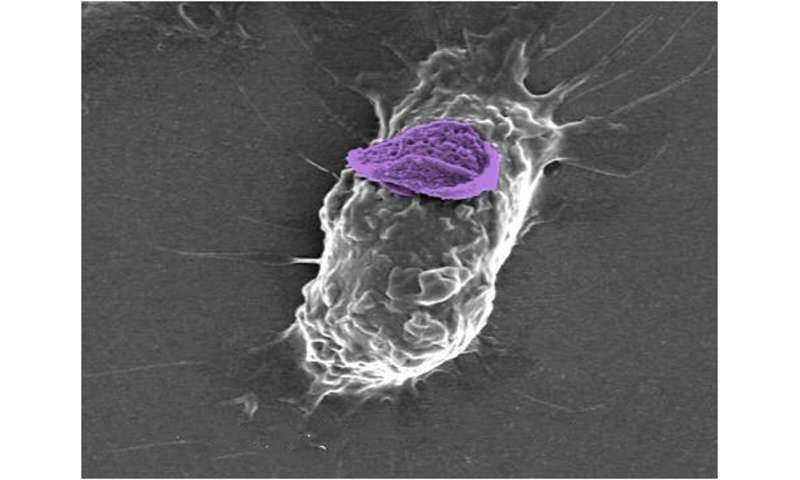 Now it was time for the real test to see if their backpacks could succeed where previous studies had failed: maintaining macrophages in their M1 state after being introduced into live cancerous tumors. The researchers injected their backpack-toting macrophages into the tumors of mice with an aggressive form of metastatic breast cancer, then evaluated them after seven days. To their delight, macrophages carrying IFNγ backpacks expressed M1 indicators for at least 48 hours, and their expression levels were significantly higher than that of injected cells with blank backpacks or with free IFNγ. They also found that mice treated with the IFNγ backpack therapy had significantly fewer metastatic nodules and smaller tumors than control mice, and lived longer.

When the team dug deeper to find out what was happening within the tumors after they were injected with the IFNγ backpacks therapy, they found a surprising result: not only did the backpack-carrying macrophages stay in their M1 state, they actually helped other macrophages within the tumor (tumor-associated macrophages, or TAMs) revert from an anti-inflammatory M2 state back to an M1 state, effectively activating them to fight the tumors that had hijacked them to do their bidding. Furthermore, this result was achieved with a dose of IFNγ that is 100-fold lower than the maximum total dose used in other studies, and the mice did not display any signs of toxicity from the treatment.

“Macrophages can make up roughly 50% of the mass of a tumor. If we are able to switch them into their M1 state and sustain that activation, it could massively reduce the size of tumors and give both the immune system and treatments like chemotherapy better access to the cancer cells themselves,” said Shields.

A control panel for living cells

In addition to producing a sustained pro-inflammatory response against tumors, the team’s backpack approach could also be used to do the opposite: shift macrophages into an anti-inflammatory state in patients who are suffering from diseases associated with excess inflammation, such as rheumatoid arthritis, Crohn’s disease, and lupus. Mitragotri’s lab is continuing to explore different applications of this technology, including loading different agents into the backpacks and testing their ability to bind and control other types of cells.