A baby born without an anus was 13 hours old before doctors noticed something was wrong with her.

The girl, who was born to a 22-year-old first time mother, weighed 5lbs (2.3kg) and appeared to be healthy.

But more than a dozen hours after the birth, her mother realised she was both urinating and defecating through the same hole. 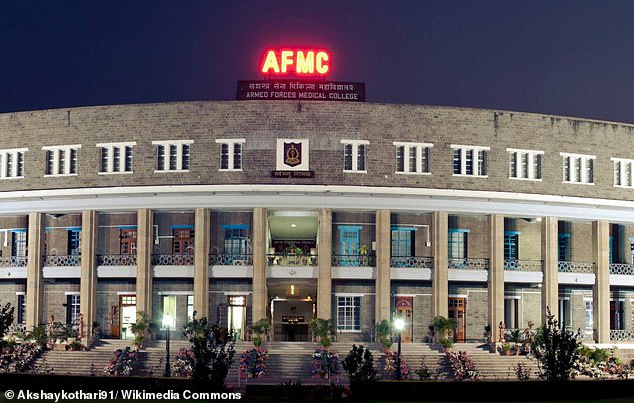 Doctors at the Armed Forces Medical College in the city of Pune, India (pictured) reported the case of the young girl in a medical journal. They said they would have to carry out surgery to repair the birth defect

Doctors at the Armed Forces Medical College in the city of Pune, India – about 93miles (150km) south-east of Mumbai – revealed the baby’s condition.

In a medical case report they wrote that the condition ‘was initially missed because of cursory examination at birth and the gluteal fold not adequately stretched to look for anorectal malformation’.

HOW AND WHY CAN A BABY BE BORN WITHOUT AN ANUS?

Being born without an anus is a type of anorectal malformation, as they’re known medically.

It is a birth defect which may be caused by an underlying condition – Down syndrome, spinal defects and Townes-Brocks syndrome, for example, raise the risk – or it may have no obvious cause.

It happens because the cells which make up the rectal opening, the end of the bowel and the urinary system all start off as a clump while a baby is in the womb.

If they don’t separate properly into their own specific functions, the baby may be born with a deformity.

Anorectal malformations are thought to affect around one in 5,000 babies.

Babies born with the defects may have a fistula – a channel or opening – which connects the bowel to the vagina, meaning they pass stool out of their genitals. Constipation may also be a symptom.

The malformations can usually be corrected with surgery.

There had been no signs before the birth that anything might be wrong with the baby, and the mother was in good health.

Doctors said they had examined the anus and found it to be ‘apparently normal’ shortly after the labour.

But they had not noticed the deformity, which they later discovered was ‘entirely covered by hyper pigmented [darkened] skin’.

Scans showed the girl did have a normal rectum but skin had grown over the opening and a channel had developed between the bowel and the vagina.

This meant that faeces was travelling through the channel, known as a fistula, and being excreted out of a different hole to the rectum.

The doctors did not find any underlying genetic conditions which could be responsible for the deformity the girl had developed.

In many cases the cause of deformities like this are not clear – it caused by the cells which make up genitals and anus not separating properly while a baby is in the womb.

Surgeons can usually repair the condition by creating an anus during an operation and connecting it to the bowel so it functions normally.

The medics had not operated at the time they wrote the case report but said they would operate to give her a colostomy bag and then later repair the deformity.

The report was published in the Medical Journal Armed Forces India.