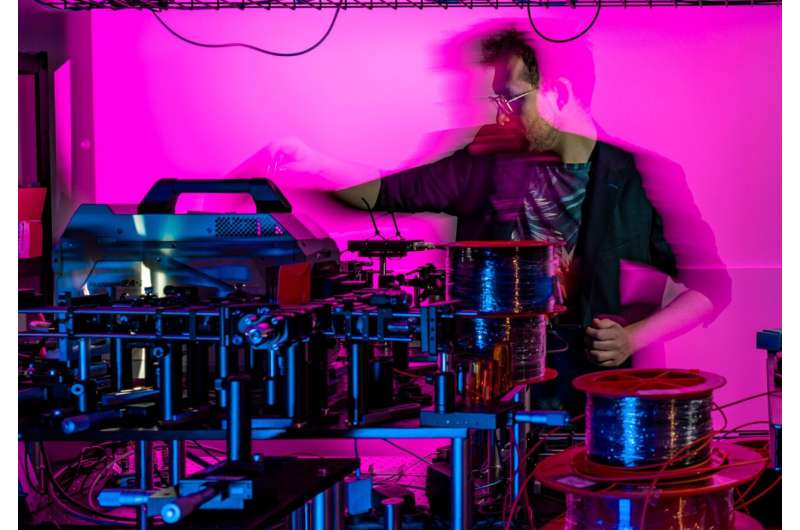 Can non-functioning photoreceptors be detected like dead pixels on a camera sensor? Until now this has not been possible, but a new technique will allow fast and non-invasive assessment of the physiological state of the retina. This could be a real breakthrough in the treatment of eye diseases.

For a long time, electroretinography (ERG) was the only advanced method to assess the physiological state of retinal function. In recent years, a new technique called optoretinography (ORG) has been developed. In one variant of this technique, optical coherence tomography (OCT), the physiological response of the retinal photoreceptors to visible light is measured as a change in optical path length in the nanometer range.

Until now, the ability to study the retinal ORG response to flicker light stimulation has been limited. However, researchers at the International Centre for Translational Eye Research (ICTER) have developed the method of Spatio-Temporal Optical Coherence Tomography (STOC-T), a variant of Full-Field OCT that they pioneered, to record retinal flicker optoretinograms.

The research was carried out by Dr. Slawomir Tomczewski, Piotr Wegrzyn, Dr. David Borycki, Dr. Egidijus Auksorius, Prof. Maciej Wojtkowski and Dr. Andrea Curatolo of ICTER, and the results have been published in the journal Biomedical Optics Express.

How to study electrical signals of photoreceptors

Electrophysiological examinations of the eye (ERG) are comprised of a group of recordings of light-induced changes in functional currents generated in the retina, the part of the eye responsible for reception of visual stimuli. These currents are transmitted to the visual area of the cerebral cortex, and then to oculomotor muscles. The study of these retinal currents are of particular interest for diagnosis of eye diseases. The most important elements of the retina are light-sensitive photoreceptor cells, which are modified neurons called cones and rods. The human retina contains about 6 million cones and 100 million rods.

Assessing the quality of the photoreceptors is crucial because their dysfunctions are linked to various eye diseases, some leading to blindness. ERG is the most common type of electrophysiological examination, recording the functional electrical potential created in the eyeball under the influence of light stimuli. The test itself involves placing on the eye an electrode in the form of a contact lens or a nylon thread saturated with a conductive agent (DTL electrode) and sending light pulses from a lamp emitting red light. The light stimuli include a short flash (1-3 millisecond), a double flash, or a flickering flash (ERG flash); as well as a checkerboard pattern of brightening and darkening squares. A special device reads the voltage values produced by these impulses.

Unfortunately, the ERG test cannot detect the faster conformational changes and contractions of the photoreceptors that result from light exposure on the retina and thus propagate the visual process. However, these fast physical changes, likely induced by the first steps in the phototransduction process, are accessible by optical investigation with ORG, which measures light-induced optical signals from photoreceptors.

Measurements of the retinal response to a flickering stimulus have proven helpful in analyzing retinal adaptation to light and differences in critical flicker frequency (CFF) between the macula and periphery. To date, a limited number of ORG studies using flicker have been reported in the literature. Of these, one ORG study measured the photoreceptor response to a periodic stimulus limited to a single low frequency (5 Hz), while two more recent ORG studies measured either the dark-adapted photoreceptor response between 1 and 6.6 Hz, or the slow response of the inner plexiform layer between 1 and 50 Hz, respectively. It has not been possible to measure the fast retinal ORG response at frequencies above 10 Hz, until now.

The ICTER scientists preadapted the eyes of volunteer human subjects to a bright light for a minute and then stimulated the retina with a visible light flickering at a constant frequency. They were thus able to record retinal ORG responses at frequencies up to 30 Hz. This protocol made it possible to determine changes in the optical thickness of the photoreceptors on the order of a few nanometers in response to a visual signal at higher flicker frequencies than ever before reported. This advanced technology enabled the determination of both the spatial and temporal responses of the retinal photoreceptor, over time-scales and frequencies that correlate with the first steps of the phototransduction process, which is the vital engine of vision.

For the first time tiny contractions and expansions of photoreceptors could be observed in a healthy human retina following light stimulation at frequencies up to 30Hz, and these could be mapped over different areas of the retina. This feat has not been achieved by anyone before. “Nor would it have been possible without the previous research of the ICTER scientists and their development of the STOC-T technique, with its exquisite sub-nanometer displacement sensitivity, high phase stability, and impressive volumetric acquisition speed, in the order of a few milliseconds,” said Dr. Andrea Curatolo, head of the Image-guided Devices for Ophthalmic Care Laboratory at ICTER.

ICTER researchers have shown that statistically significant differences in the amplitudes of photoreceptor optical path length modulation in response to different flicker frequencies can be detected in light-adapted eyes with a better signal-to-noise ratio than in dark-adapted eyes. These results highlight the prospect of a more objective study of CFF changes across the retina, which could enable early detection of retinal degeneration and other photoreceptor abnormalities.