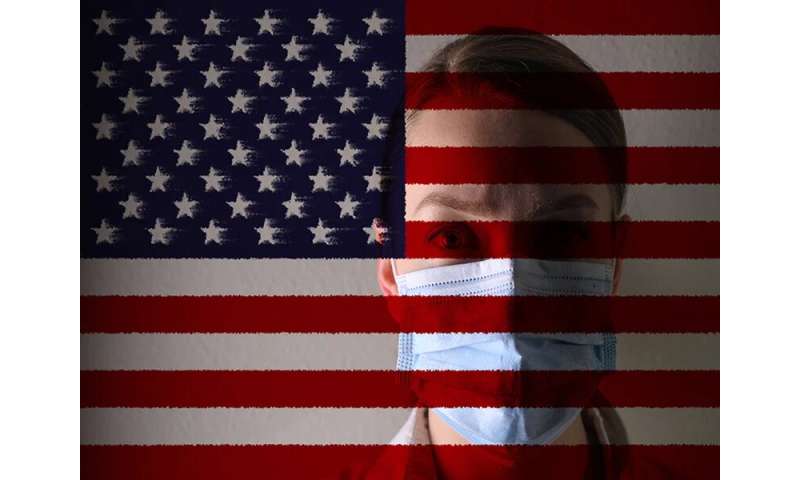 In a sobering illustration of the toll the coronavirus pandemic took this summer, tallies now show the number of Americans who have died of COVID-19 jumped from just under 100,000 to over 186,000 between Memorial Day and Labor Day, while cases more than quadrupled, to over 6.2 million.

As troubling as those statistics are, public health experts warn the fall and winter could be even worse, the Washington Post reported.

A cold-weather surge of COVID-19 cases could trigger a much-feared “second wave” of infections and deaths that begins well before Election Day in November, though scientists believe the crest of cases would come weeks later, the Post reported

“My feeling is that there is a wave coming, and it’s not so much whether it’s coming but how big is it going to be,” Eili Klein, an epidemiologist at Johns Hopkins University School of Medicine in Baltimore, told the newspaper.

Still, national numbers have been slowly dropping following surges that showed up in the Sun Belt in early summer, the Post reported.

A model produced by the University of Washington’s Institute for Health Metrics and Evaluation (IHME) predicts a daily death toll of 1,907 on Election Day, roughly double the current number. Under the IHME forecast, the numbers would continue to rise until early December, peaking at more than 2,800 deaths daily.

By year’s end, over 410,000 will have died under the model’s most likely scenario. That’s more than double current total.

“I firmly believe we will see distinct second waves, including in places that are done with their first waves. New York City, I’m looking at you,” Andrew Noymer, an epidemiologist at the University of California at Irvine, told the Post.

As the Trump Administration races to produce a COVID-19 vaccine as quickly as possible, the chief adviser for the White House vaccine program said it was “extremely unlikely, but not impossible” that a vaccine could be available by the end of October.

Speaking with National Public Radio last week, Dr. Moncef Slaoui said that the U.S. Centers for Disease Control and Prevention’s guidance to states to prepare for a vaccine as early as late October was “the right thing to do” in case a vaccine was ready by that time.

“It would be irresponsible not to be ready if that was the case,” Slaoui said, adding that he first heard about the new CDC guidance from media reports, the Post said.

Still, Slaoui, the chief scientific adviser for Operation Warp Speed, described getting a vaccine by late October as a “very, very low chance.”

Slaoui did confirm that the two main vaccine candidates, referred to as Vaccine A and Vaccine B by the CDC, were being developed by Pfizer and Moderna, respectively. He said there was “no intent” to introduce a vaccine before clinical trials were completed. The trials would only be completed when an independent safety monitoring board affirmed the effectiveness of the vaccine, he added.

While expressing doubt about an October timeline, Slaoui believes “that we will have a vaccine available before the end of the year and it will be available in quantities that can immunize patients, subjects at the highest risk.”

By the end of the year, there should be enough doses of the vaccine ready to immunize “probably between 20 and 25 million people.”

There should be enough doses to immunize the U.S. population “by the middle of 2021,” he added.

In a finding that should encourage scientists who are racing to develop coronavirus vaccines, a new study out of Iceland suggests that immunity to the disease may not be as fleeting as first thought.

Among 30,000 Icelandic residents who were tested for antibodies to COVID-19, researchers discovered the antibodies stayed in people’s systems for at least four months, the study found.

Of those who tested positive for the coronavirus, 487 had received multiple antibody tests. In the first two months after a patient was diagnosed, the antibodies that can confer immunity rose significantly. For the next two months, antibody levels remained stable, according to the study published recently in the New England Journal of Medicine.

In a commentary that accompanied the study, scientists from Harvard University and the U.S. National Institutes of Health noted that while the Icelandic research focused on a largely homogeneous population, “this study provides hope that host immunity to this unpredictable and highly contagious virus may not be fleeting and may be similar to that elicited by most other viral infections.”

Earlier research on coronavirus antibodies had indicated that immunity might be short-lived, leaving people vulnerable to reinfection. But the Icelandic study offers hope that a vaccine that triggers a strong immune response will have a longer-lasting effect than some had believed.

The Icelandic researchers also found that women, nonsmokers and older patients had higher levels of antibodies, as did those who had suffered more severe infections, the newspaper said.

By Tuesday, the U.S. coronavirus case count passed 6.3 million as the death toll passed 189,000, according to a New York Times tally.

Curbing the spread of the coronavirus in the rest of the world remains challenging.

On Tuesday, India overtook Brazil to become the country with the second-highest number of coronavirus cases in the world, the Post reported. India added nearly 91,000 cases in the past 24 hours, a new global record in the pandemic. That pushes the country’s case count past 4.2 million; only the United States has recorded more. More than 71,000 people in India have died of COVID-19, making it the worst-affected nation in Asia, the Post reported.

Unlike the United States and Brazil, where the number of new cases have eased in recent weeks, India has been reporting the highest daily increases in cases in the world since early August, the Post reported.

After instituting the world’s largest lockdown this spring, Jayaprakash Muliyil, a leading Indian epidemiologist, predicted that the country’s daily reported cases will continue to rise in coming weeks. He told the Post that the daily cases could double over the next month before retreating.

Cases are also spiking in Russia: The country’s coronavirus case count has passed 1 million, the Times reported. As of Tuesday, the death toll in Russia was 17,939.