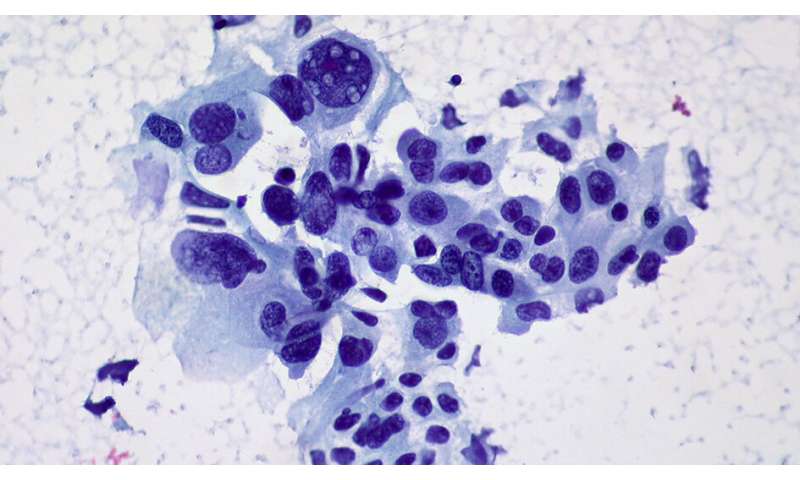 Computer scientists working with pathologists have trained an artificial intelligence (AI) tool to determine which patients with lung cancer have a higher risk of their disease coming back after treatment.

The AI tool was able to differentiate between immune cells and cancer cells, enabling researchers to build a detailed picture of how lung cancers evolve in response to the immune system in individual patients.

Although this research is in its early stages, this ground-breaking approach could speed up how doctors can predict which patients are more likely to see their lung cancer return, so they can be closely monitored with tailored treatment plans.

The new AI tool—developed by researchers at The Institute of Cancer Research, London, in collaboration with scientists at University College London Cancer Institute and the Francis Crick Institute—was trained by pathologists to pick out immune cells from cancer cells. This allowed the tool to map out areas in tumours where the number of immune cells were high compared to the number of cancer cells, in patients with lung cancer.

When the researchers followed the progress of patients who had a higher number of ‘cold’ regions, they found patients were at a higher risk of relapse.

The paper was published in Nature Medicine and is showcased alongside 8 other TRACERx publications on the Nature website.

Scientists led by Dr. Yinyin Yuan from The Institute of Cancer Research (ICR) combined AI pathology image-mapping technology with next-generation sequencing. They used this tool to analyse samples from 100 patients with non-small cell lung cancer who took part in the TRACERx study.

Comparing immune hot or cold areas within the same tumour, the team assessed the extent to which their genetic make-up differed, giving them clues as to how they had changed in response to evolutionary pressures.

Evolutionary pressure from the immune system

The researchers suggest that areas of the tumour with fewer immune cells may have developed a ‘cloaking’ mechanism under evolutionary pressure from the immune system allowing them to hide from the body’s natural defences.

Their AI tool can assess how many regions with this cloaking mechanism exist within a tumour—which is critical given that these immune cold areas are associated with cancer relapses.

This early research could in future be used in the clinic to give doctors more detailed information about the cellular make-up of tumours than can be seen with the naked eye, informing the development of tailored treatment strategies for individual patients.

“In our new study, we applied artificial intelligence to genetic data and pathology images, to create a new tool that could in the future help pick out those patients with lung cancer who are at highest risk of their cancer coming back.

“We’ve gained new insight into how lung cancers can cloak themselves to escape the attention of the immune system—and in doing so can continue to evolve and develop. Cancer’s ability to evolve and to come back after treatment is one of the biggest challenges facing cancer researchers and doctors today.

“Our research has revealed fresh insights into why some lung cancers are so difficult to treat, and we wouldn’t have been able to do this without the scale and scope of the TRACERx project.”

“Much like the finches Darwin described in the Galapagos islands, cancer cells also grow and evolve in response to their unique surroundings, weeding out the weak to let the strongest survive. This unstoppable force of nature means curing cancer after it has spread is a difficult task and helps us understand how tumours develop resistance to even the most advanced and powerful treatments we have.

“Focusing on the intricacies of the tumour alone isn’t enough, we need to explore the environment that each tumour is growing in and to understand its influences. TRACERx has given us the platform to explore this in exceptional detail and has shown us that multiple approaches at different stages of the disease are needed to outwit cancer.”

Mapping the evolution of lung cancer

Dr. Mariam Jamal-Hanjani, senior clinical lecturer and consultant medical oncologist at UCL Cancer Institute, who has worked on TRACERx since its inception, said: “Unfortunately, lung cancer survival remains among the lowest of all cancer types despite new treatment options for patients. This can be due to lung cancer cells evolving, becoming resistant to treatment causing the disease to return or worsen.

“TRACERx is enabling us to map the evolution of lung cancer from diagnosis to cure after surgery or death, and is already revealing how we can offer patients better care and treatment. Not only have we found new ways to predict treatment response and outcome, but we can now detect when lung cancer has returned before it is seen on a scan. And new cutting-edge treatments that use a patient’s own immune cells that have been reprogrammed to target lung cancer cells could become a reality.”