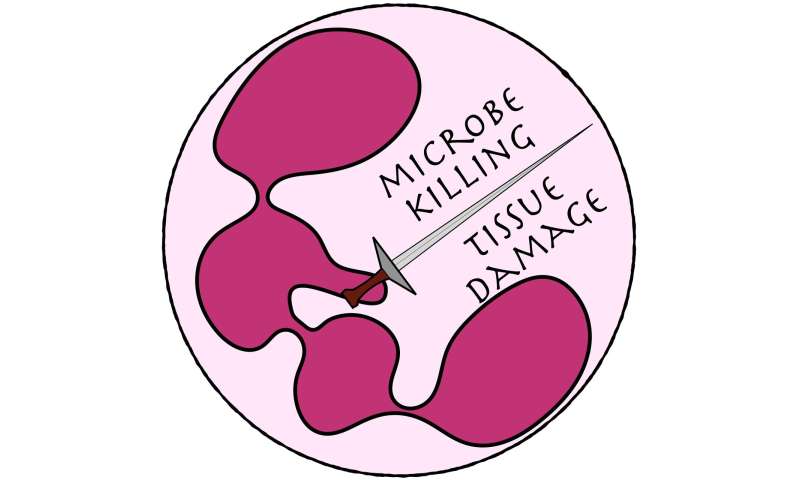 As the COVID-19 pandemic continues to spread, researchers are turning their attention to the virus’ biology, mechanism of action, and possible treatments. One of the targets is a group of immune cells called neutrophils, which have been reported to infiltrate the respiratory tracts of patients who have died from COVID-19.

The idea is that in their attempt to attack the virus, neutrophils might be making the disease’s symptoms even worse by invading the lungs and exacerbating inflammation there. In order to study such phenomena, scientists often use a mouse model whose neutrophils they deplete with “anti-neutrophil” antibodies.

The approach is used widely for studying neutrophils in a number of conditions, including autoimmune diseases, chronic infection or inflammation, wound healing, and even some types of cancer. However, the neutrophil-depletion model is only partially effective, lacks specificity, and doesn’t last long enough.

Now, scientists led by Etienne Meylan at EPFL, have identified the source of the problem and have developed an alternative model that addresses its shortcomings. The work is published in Nature Communications.

By attempting to deplete neutrophils in mice, the animals’ bone marrow produces new neutrophils, which defeats the model’s entire purpose. The researchers have now identified these neutrophils, and determined that the reason they survive is because they have a lower chance of being targeted by the antibodies.

To address this, the scientists have developed a double antibody depletion strategy that enhances neutrophil elimination. The method increases the killing rate of the antibodies, resulting in a profound, specific and long-lasting reduction in neutrophil numbers in blood and tissues.