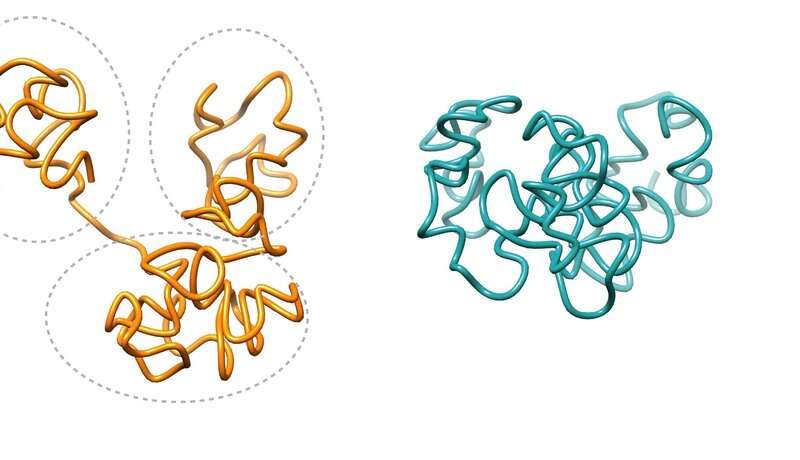 The three-dimensional structure of the human genome is essential for providing a rapid and robust inflammatory response, but is surprisingly not vital for reprogramming one cell type into another, according to research published today in Nature Genetics. The findings shed new light on the fundamental relationship between how a genome folds and the function of a cell.

Each human cell has two meters of genome condensed down into 10 microns within the nucleus. Folding the genome is more than a packaging solution, it helps genes make physical contact with other genes or a regulatory element that may be located quite a distance away along the chromosome. This is crucial for cell function.

The precise 3-D structure of the genome is weaved together by architectural proteins. CTCF is one of the most prominent of these structural proteins. Collectively, it helps to shape the overall three-dimensional structure of the genome, which is why CTCF has been shown to be essential for embryonic development, DNA repair and cell cycles, as well as many other vital processes that make it an intensive area of research.

“If you think of the structure of the genome as a house, CTCF is the scaffold dividing the space in rooms and shaping the building,” says Thomas Graf, senior author of the study and Group Leader at the Centre for Genomic Regulation in Barcelona. “Studying CTCF helps us understand the glue that holds the genome together, and by proxy the role of 3-D genomic architecture in various fundamental processes in life.”

CTCF’s role in transdifferentiation is particularly controversial. This is when a cell reprograms itself into another type of cell without undergoing an intermediate state, such as pancreatic alpha cells turning into insulin-secreting beta cells after injury of the pancreas.

To study this, researchers at the Centre for Genomic Regulation (CRG) in Barcelona developed a unique system where human B cells can be induced into becoming macrophages. To uncover CTCF’s role in this process they used CRISPR genome editing tools to degrade the protein and study changes in genome organization as the cell fate changes.

“To our great surprise, cell transdifferentiation continues to take place with or without CTCF, even though the shape of the human genome changed” says Thomas. “Answering one question has led to another. What are the other factors that participate to the 3-D architecture of the human genome that are essential for one cell to turn into another?”

Importantly, the researchers also found that CTCF depletion impairs a cell’s ability to have a full-blown inflammatory response in the presence of bacterial endotoxin. It is one of the first instances in which researchers have discovered a link between 3-D genome architecture and inflammation.