Whether we're talking the end of the Victoria's Secret Fashion Show or the rise of Rihanna's Savage X Fenty lingerie, 2019 will be remembered as the year of body positivity.

Not only were fleshy frames regularly advertised in the once-skinny-only world of lacy unmentionables. They also were lauded at awards shows as women with everyday figures like Queen Latifah and Chrissy Metz walked red carpets in generous Christian Siriano confections. 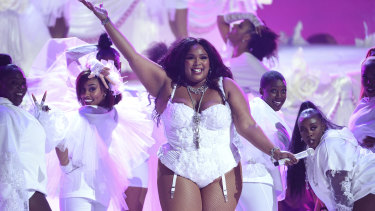 We watched, unfazed, as full-figure women on television dramas enjoyed full love lives – and nice wardrobes – from Metz's postpartum Kate on This Is Us to the devious Deborah Joy Winans' Charity on Greenleaf. And editors at Sports Illustrated broke practice from previous years when they put a curvier – and older – Tyra Banks on the cover of the May swimsuit issue. (That said a lot for the edition known as the glossy purveyor of all that is busty and lithe.)

But it's the classically trained flutist and Grammy-nominated singer Lizzo – real name Melissa Viviane Jefferson – looking Good as Hell in her "tossed hair" and "checked nails" who this year claimed the body in body positivity. 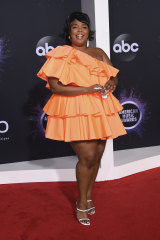 Her 5-foot-10-inch frame commanded every live performance and music video in which she performed. She regularly and unabashedly showed off her assets in leather, Beyonce-like bodysuits.

And she always oozed confidence and cleavage, whether she was wearing a lacy wedding gown in the Truth Hurts video, carrying a tiny Valentino purse to the American Music Awards, or performing in a Gucci trench-coat dress during this month's Saturday Night Live appearance.

And in one of 2019's boldest fashion moves, Lizzo attended a Lakers game in butt-cheek-less pants.

Lizzo is not waiting to drop a few pounds to live her best life. She's getting it in now – rightly so.

"It is my hope that people are able to see themselves in Lizzo," said Samantha DeCaro, a clinical psychologist at the Renfrew Center of Philadelphia in the US, which treats people with eating disorders.

"Perhaps women will be able to see their own strengths through her. She's a role model and can be a catalyst in our culture (so that we can begin to) shift the narrative and fight against weight stigma and fat phobia."

Here come the groans. Really? Lizzo showing her goodies to the world can help win the fight against fat hate?

While fat activists and plus-size fashion advocates have been demanding for years that they be taken seriously, that the media portray body-positive images, this is the year that body positivity (BoPo) has really taken a mainstream hold – and that's largely due to Lizzo.

"When you have a higher-weight female who is everywhere and is a smashing success like Lizzo, it definitely has an effect," said Rebecca Scritchfield, a Washington-based registered dietitian and nutritionist and author of Body Kindness. "She achieved success, enviable success, despite her body. So her size becomes a part of the conversation because we aren't used to it."

Where Lizzo stands out: She accepts her body on her terms. But her actions have led to screeches of fat shaming – some, in-your-face-blatant; others, more insidious and laced with pity.

I even caught myself after Lizzo's Lakers moment thinking that if I support people like her, then perhaps they might feel better about themselves and lose the weight. 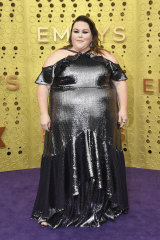 Tsk tsk, Elizabeth. People don't get to love their bodies based on my terms.  "Being overweight is among the last of the allowable shames," said Marquita Williams, a Philadelphia psychologist who helps her plus-size clients find self-love and build lasting relationships.

"The thought is [big people] can't possibly be in the skin they are in and love themselves at the same time. Losing weight, however, doesn't equal loving oneself more."

This shaming, DeCaro said, originates in the belief that fat bodies are inherently unhealthy. But that's wrong, she said. "We don't know anything about Lizzo's health. She can have better blood work than I do. We really can't assume anything by looking at her. We like to conflate health with weight and there is a huge difference between correlation and causation."

If the debate isn't about health, it's often about what society thinks is appropriate.

My own mother often repeated this sentiment when I was growing up: Now you know they shouldn't make (insert apparel here, but her favourite was leggings) over a size 14. My mum wasn't a big woman, but she was definitely closer to a 14 than a 4.

This fashion-is-not-for-everyone message is part of the reason why designers make collections that top out at a 12 (other reasons have to do with fit and cost).

But we are still holding on to this idea that big women should be seen only in glittery-lapel church-lady suits, or elastic-waist jeans. Lizzo in her leather body suits with her flabby tummy and fleshy arms really challenges that status quo.

"This is really, really powerful because Lizzo is using her power as a celebrity to be happy in the skin she's in now," Scritchfield said. 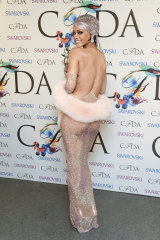 Fashion Icon Award honoree Rihanna with her award at the 2014 CFDA Fashion Awards.Credit:AP

Let us also not forget that even though everyone seemed offended 30 years ago when Cher showed up at the Academy Awards half-naked or Sharon Stone uncrossed her legs in Basic Instinct, nobody made much of a fuss in 2014 when Rihanna arrived at the Council of Fashion Design Awards in a Swarovski-crystal encrusted, see-through Adam Selman gown. We chalked that up to women's empowerment. It's her body. She has the right to show it.

Yet we don't seem to want to extend that right to fat women. You could argue the Lakers game is a family event, but I heard the same "Stop it, girl" arguments earlier this month when Lizzo posted on Instagram a series of nude shots, including her naked backside sitting on a tub's edge.

"The problem is people want to determine who gets to be confident and who doesn't, and big black women were never afforded that," Williams said.

"We are at a place now where we are owning our sexuality and owning everything about ourselves, regardless of what you think."

The bottom line: While 2019 was a breakout year in body positivity, we still have a lot of work to do in 2020 – none of which needs to be done in the gym.

"What body positivity is trying to do is give everyone the freedom and the power to take care of themselves and at the same time feel good while doing it … in the moment," Scritchfield said.